Thomas and Mary Wardle and children in San Francisco 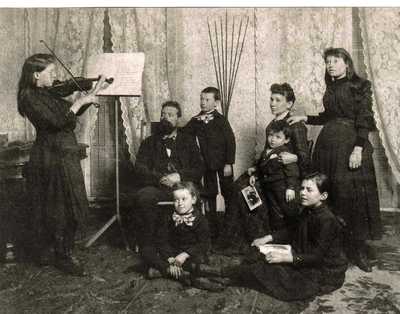 Below is an explanation as to why in past years (pre2021) I had claimed Sydney Wardle as my great grandfather. When I had my DNA tested by familytreeDNA in 2016, I found that I had no matches to the surname Wardle. But the connection was still possible. Then in 2021 I had my DNA tested by ancestryDNA and again no Wardle matches. Also I had a good number of strong matches with the surname Byrne. Following further research and making connection with a Byrne cousin, I decided my great grandfather was not Sydney Wardle but was most likely John Byrne. See my Byrne research for a full explanation.

The following article appeared in the magazine Australian Family Tree Connections in June 2011.

How much proof is required?

Not long after I started researching my family history in 1968 I obtained various birth, death and marriage certificates, including those for my father’s mother, Margaret (Maggie) Adeline Bullivant (1890-1961). Much to my disappointment her father’s name was not recorded on any of these certificates and nor anywhere else I could find at that time. So I thought I would not be able to trace an eighth of my tree.

Years went by. Then in 1974, when I was living in Canberra, I went with a cousin to the Mitchell Library in Sydney to research our common Lane ancestors of Windsor. One of the sources we asked for was some bound baptism, marriage and burial registers of the Methodist Church in NSW. In order to further appreciate this story I should explain that these large volumes were not indexed by circuit (similar to a parish). This meant one simply had to take “pot luck” in choosing which volumes to check. Also there was no logic to which circuits were in which volumes.

We found the Windsor circuit volumes and looked for the entries we were searching for. I finished first and decided to browse through the volume in front of me. I suddenly realised that I was looking at the Redfern Circuit marriages. My grandmother Maggie was on my other half of my tree and was also a Methodist . Then I realised I was looking at her marriage certificate (1912) and to my great surprise her father’s name was stated; Sydney Wardell. I nearly fell off the chair and wanted to shout out my discovery, but one only spoke in hushed tones in the Mitchell Library.

So I wonder why her father’s name was included in the Church entry and not in the Registrar’s copy? I can only explain this by thinking that my grandma did not want her father’s name recorded and that the minister, in respecting her wishes, did not include his name in the official Registrar’s copy but convinced grandma that no one looked at the Church entry so it was safe to record his name there.

Maggie was named after her mother Margaret Adeline Bullivant, who never married and died in 1897 in a cab on the way to hospital, aged 28 years.

I realised I should try to find supporting evidence. Sydney later married and had children. He died in 1956 at Naremburn, Sydney, and his death certificate makes no mention of his daughter Margaret. I found he was born in Sydney in 1869; his parents being Thomas Wardell and Mary Little. This couple had married in Auckland in 1867. As their marriage certificate did not reveal their parents’ names, I needed their death certificates in order to go further back in time. I ordered many 5 year death searches from the NSW BDM Registry but nothing found.

Years went by. Then in 1981 I placed a member’s query in the Ancestral Searcher, magazine of the Heraldry and Genealogy Society of Canberra, seeking information about their deaths. A member of the Western Australian Genealogical Society was on duty at their library. He decided to read some recently received journals and came across my query. He wrote to me explaining he too was researching Wardle and had recently obtained two WA death certificates that turned out not to be related, but he thought they might be my ancestors. Thomas, sailmaker, died in 1907 in Perth and Mary died in 1932 in West Perth. Both certificates listed Sydney amongst their children. It pays to advertise. This was also my first spelling change from Wardell to Wardle.

This enabled me to establish that the births of their children after Sydney had taken place in New Zealand, except for their last born son Arnold (birth place unknown at that time). I later found out that the family had travelled to Fiji where Arnold was born in 1885 and then to San Francisco where they lived for several years before travelling to Perth in the mid 1890s. (See the story of Thomas and Mary’s son Walter by clicking on link below.)

Thomas’ parents were given as William Wardle, master mariner, and Elizabeth McCormack, and the certificate states he was born in Sunderland, Co Durham, in about 1840. I then searched for his birth and the closest I found was a Joseph Thomas Wardell, born in Sunderland on 7 December 1840 to William Wardell, mariner, and Elizabeth Murphy. So I was stuck again as in those days it was not easy to search the various census returns, although I did find the above family listed in the 1851 census, with sons Joseph and William.

Years went by and in March 2006 I set up my own family history web site and on my home page I described my visit to the Mitchell Library above, as my biggest thrill in researching my family tree (now deleted from home page, GT June 2011). Then just five months later I received an email message from Diane in Perth, a descendant of Thomas and Mary. Their family documents had Thomas’ birth date as 7 December 1841.

Not long after that I made contact with another Wardle cousin and between the three of us we are satisfied that our ancestor was Joseph Thomas born 1840, who later used Thomas as his given name, probably in memory of his grandfather Thomas. His father William became a captain of small ships sailing out of Sunderland. On occasions William used the name William Wardle/Wardell or William Page Wardle/Wardell. The use of Page proved to be very important.

From the parish registers we found that William married Elizabeth Murphy on 3 February 1840 in Sunderland. William was born on 11 November 1818 and baptised William Wardell on 14 July 1819 in Sunderland, the son of Thomas Page Wardell and Jane Mahone. What is interesting and also very important is that his father is named as Thomas Page by one hand and above the word Page, Wardell has been added by another hand. The Bishop’s Transcript only records the father as Thomas Page.

More research revealed that Thomas married Jane in St Mary’s Church, Portsea, Hampshire, on 12 December 1805. This led to the exciting story of Thomas’ service in the Royal Navy. He joined HMS Victorious in January 1795 and two months later was promoted to Able Seaman. In August 1803 he joined a new 36 gun frigate, HMS Euryalus and was promoted to yeoman of the powder room three months later.

In September 1805 Euryalus sailed from Spithead in company with Lord Nelson in HMS Victory to join the blockading squadron off Cadiz. Euryalus was the leading frigate of four watching the movements of the combined French and Spanish fleet at anchor in Cadiz harbour.

The enemy fleet sailed from Cadiz on 20 October and was shadowed by the four frigates with Euryalus reporting the enemy’s position to Lord Nelson in command of the British Fleet sailing beyond the horizon to the west.

Nelson decided to attack the combined fleet the next day. His plan broke with tradition by dividing the fleet into two groups, both to attack the enemy line at right angles. During the briefing of captains by Nelson, Captain Blackwood proposed that Nelson transfer from HMS Victory to the faster Euryalus so as to better observe and control the battle. But Nelson declined, and said to his friend “God bless you, Blackwood, I shall never see you again.” Blackwood was a witness to Nelson’s will.

Euryalus and the other three frigates took on the role of supporting the larger ships during the battle. Late that afternoon she took under tow the badly damaged HMS Royal Sovereign, and turned her so that she could engage the French ship Formidable.

Blackwood was on board the Victory when Nelson died in mid afternoon. Second in command Admiral Collingwood transferred his flag from the damaged Royal Sovereign to the Euryalus, which became the flagship of the British fleet.

After the battle Euryalus took on survivors from the French battleship Achille. Blackwood also received the surrender of the Spanish ship Santa Ana. Euryalus later sailed into Cadiz Harbour so that negotiations could take place regarding the exchange of prisoners. On 31 October Euryalus sailed for Portsmouth with the French Admiral Villeneuve as a prisoner.

For his part Thomas received his Parliamentary Award of £4 12s 6d. It appears he did not claim his prize money of £1 17s 8d. Many years later the Government decided to award the Naval General Service Medal with the Trafalgar Clasp to any living sailor who had been part of the Battle. This offer was made in 1848 and ceased in 1851. From the register of medals issued it would seem Thomas or a member of his family had to go to Newcastle to take delivery of the medal.

Thomas remained with the Euryalus until 1809 when he transferred to HMS Leydon. By 1811 he was the ship’s Boatswain’s Mate and later served on HMS Royal William, HMS Victory, and HMS Fly. He returned to Sunderland with his family in about 1815 and became a keelman sailing the waters of the River Tyne and later a pensioner. Thomas and Jane had a large family, and he died at Seaham, Co Durham, in March 1856 aged 84 years.

Further research indicates that Thomas was baptised on 12 January 1772 in Sunderland, the son of Thomas and Martha Page. He had two children from his first marriage to Mary Gibson, including a son named Robert Wardle Page in 1791. It is likely he changed his surname to Wardle at the time he enlisted. Perhaps his mother’s maiden surname was Wardle – a challenge for further research.

In 2010 a memorial to 66 sailors from Sunderland, including Thomas, who took part in the Battle of Trafalgar was unveiled in Sunderland.

Recently another Wardle cousin contacted me and he said that within his family, stories had been handed down about a Wardle ancestor who had taken part in the Battle of Trafalgar.

But all this research still depended on my grandmother saying her father was Sydney Wardell in her marriage entry in the Redfern Circuit Methodist Church register. Then 35 years after finding this entry, an online index of the records of the Sydney Benevolent Asylum (where my grandma was born) became available in 2009. This index led to a search of the admission and discharge register. The admission entry for my great grandmother Margaret Adeline Bullivant states quite clearly that the father of her daughter is Sydney Wardell, wheelwright. I had my supporting evidence at last.

Bullivant/Byrne/Wardle
Return to my link page

Published in the Sunderland Echo in 2009

The story of Thomas Page and Jane Wardle’s great grandson