Errors on the net 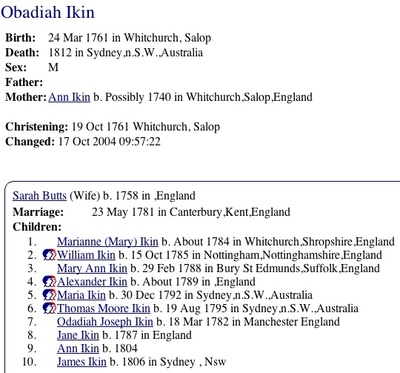 Above is a page from the web site hosted by gencircles submitted by Peter Krafft some years ago. While Peter has done a great job creating his family tree on gencircles, he has also included some entries that are incorrect. I drew his attention to the following three entries in 2006 but as at 3 April 2010 all three remain listed as children of Obadiah and Sarah Ikin.

In my view none of them are children of Obadiah and Sarah Ikin.

At that time in Liverpool there lived a family named SKIN or SKINN and their surname has been confused with IKIN on a number of occasions and this is one of them. The online NSW births, death and marriages indexes lists Jane under Ikin.

I have a book put out by the Liverpool Council on burials in the first cemetery (St Lukes) and she is listed under Skin – died 30 June 1822, aged 35 years. Also listed is Charles Skin, died 20 June 1822 aged one year. In the online NSW births, death and marriages indexes, Charles is also found under Ikin with parents William and Jane. The same index reveals that William Skinn married Jane Host in 1815, and that Charles Skin was baptised in 1821.

There are no Ikin entries in the St Lukes, Liverpool cemetery list.

This man is a convict who arrived on the ship Camden in 1831. He received a Ticket of Leave passport on 28 November 1836 on the recommendation of the Penrith bench, see NSW State Records web site. The book General Return of Convicts in New South Wales 1837 lists James Ikins, aged 30 years, ship Prince Regent 1830, Cassilis, T of L. In 1830 the ship Prince Regent arrived in Hobart and there is no James Ikin(s) listed as being on this ship. Also the State Library of Queensland web site listing convicts extracted from HO 11 states James arrived on the ship Camden in 1831.

I am reasonably certain that this is Ann Jones who married the other Ikin convict, Joseph Ikin in 1848, see the online NSW births, death and marriages indexes. Joseph Ikin arrived in Sydney on the ship York on 7 February 1831, he was 35 years, a native of Cheshire. Joseph married Ann Jones on 17 January 1848 at Windsor, NSW. They dont appear to have had any children. Ann Ikin died on 11 March 1855 aged 51 years.

There is no evidence that Obadiah and Sarah had children Jane, Ann or James. If they had then you would have thought they would have appeared in such records as the 1822 Muster and 1828 Census, and possibly Sarah’s will.

These errors also appear in other people’s family histories on such sites as rootsweb site .

Return to my home page

Return to the Ikin story