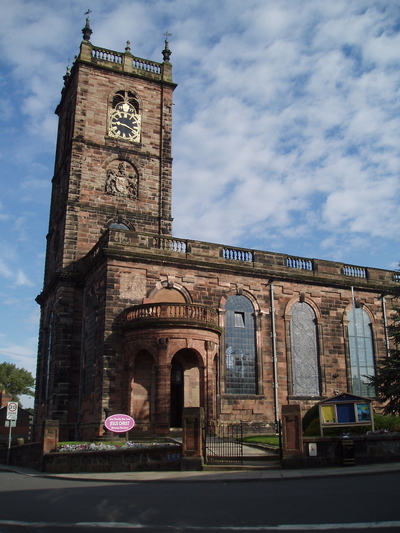 North Shropshire in the 18th Century

by the late Martin Wallace

The name Ikin is said to be derived from the Saxon ida, a labourer, and the diminutive ‘kin.’ The name is common in the parish registers of North Shropshire in the 17th and 18th centuries, in Whitchurch, Whixall, Prees, Wem and Lee Brockhurst. The name also occurs in the registers of Wellington, some 30 km south of Whitchurch.

An alternative origin is offered by Frederick Ikin of Crewe, in Cheshire [c.2004]. He quotes P H Reaney [The Origin of English Surnames] as stating that the suffix -kin used as a diminutive, is of Teutonic origin, and found in early German and Dutch, but not early English. The Flemish name would be EIKEN or “oaks”. The first Flemings came to England with the Conqueror, and later many were settled in South Wales and along the English-Welsh border. If Frederick Ikin is right, this explains the concentration of the name in Shropshire.

In his lecture on the origin of English surnames, Dr. George Redmond of Huddersfield stresses the likelihood that they have arisen from one family, and indeed one person. The distribution of a surname in English records becomes more and more limited geographically, the further back in time one goes. The distribution of the name Ikin in the counties of England shows a striking concentration in Shropshire and Cheshire when assessed from the entries in the 1984 edition of the International Genealogical Index (1). Redmond also makes the point that rural life was more secure in the period 1350-1550 and a surname was more likely to survive in the countryside.

The earliest written reference I have to the Ikin family is from the manorial records of Whixall, when in 1615, “Isabella Kettle surrendered one cottage in the occupation of John Browne, to Edward Eykin.” The subsequent parish registers include many Ikins, with alternative spellings of Aiken, Eyken, and Iken.

A search for the name Obadiah Ikin reveals three men with that name (I will use this spelling, although Obediah occurs.)

Obadiah I – This man married Bridget Beddow in Myddle, a Shropshire village, on 21 June 1719. She was probably a member of the Beddow family described by Richard Gough in “A History of Middle” in 1700. I can’t find a link with our family.

Obadiah II wrote a will on 17 May 1793 in which he described himself as “a sawyer, with two dwelling houses and lands situated in Whixall where I now live.” He must have died shortly after for his will was probated at Prees on 3 July 1793. The list of beneficiaries has allowed us to identify a large family of Ikins.

He left half his property to be shared equally between:

The other half of his property he left to John Hall and David Chidlow, who were joint owners. Joseph Ikin the younger was an executor.

Obadiah III – This man was our ancestor who came to Australia in 1790. He was baptised at St. Alkmund’s in Whitchurch on 24 March 1761. His mother’s name Ann Ikin is recorded, but no father’s name was included.

Peter Krafft (2) has constructed a spreadsheet presentation of Ikin family births and marriages, using parish register transcripts, the IGI, and any other sources. His records begin in the 17th century. Peter has generously given me access to this resource. With the information from Obadiah II’s will, it is possible to make the following family structure.

They had nine children at least. The records are not complete. I have identified those mentioned in Obadiah II’s will by a x after their name.

Anne’s parents are recorded as mother Ann, father Joseph. There are no other births recorded to this couple, and there is no Joseph recorded of an appropriate age. Peter has suggested that a transcription error has occurred, with a written “Job” being mistaken for “Jos.”

6. OBADIAH II x – We have no information as to when and where he was baptised.

It is likely that the family shifted to Wellington as part of the population shift outlined above.

The population pressure resulted in an increasing enclosure of any remaining waste land. It was a custom that any squatter on such land who could raise a house in a day so that the chimney was smoking at the end of the day could hold the house and some surrounding part of the waste area. Such cottages were often built on the manor boundaries, where land had been left.

On the 1847 Tithe map of Whixall, William Ikin and Richard Jones are shown as “owners” of a cottage and four acres on the northern boundary of Whixall Manor. This may have been the William baptised 30 January 1790 who was a beneficiary in Obadiah II’s will.

Bill Fencourt of Whixall sent me photos of the cottage which he says has the characteristics of a squatter’s building, at least in the older part.

There were no Ikins living in Whixall by 1851, but Bagshaw [1854] lists a Richard Jones as a farmer at Bostock Hill farm in Whixall. (3)

The 1901 Census of England records 63 Ikins living in Shropshire. Of these, 23 were male and their birthplaces were:
Prees – 6
Wem – 4
Lee Brockhurst – 4
Horton – 2
One each at Molverhampton, Ightfield, Whixall, Red Lake, Rhyl (Wales), Staffordshire, Lilleshal.

Of the 40 females listed, 10 were born outside Shropshire.

This is part of Grahame Thom’s web site